This article is about the Rock Raider vehicle. For the LEGO set featuring it, see 4910 Hover Scout. 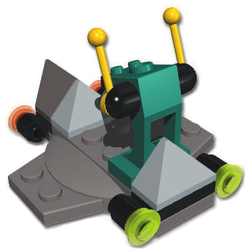 Official artwork of the Hover Scout

The Hover Scout is a vehicle from the LEGO Rock Raiders theme. It is a small and inexpensive craft that uses "hover propulsion technology", causing it to float above the cavern floor. It is used for long-distance terrestrial reconnaissance, and can carry a single pilot at high speeds over debris and terrain that could not be quickly or safely traversed on foot. The Hover Scout is featured in the LEGO set 4910 Hover Scout, along with Jet and an assortment of tools. Hover Scouts can be used in the video game LEGO Rock Raiders, and the game's cover art depicts Chief piloting one past a rock monster. Various books and comics make frequent use of Hover Scouts, showing them as the most common vehicle in the Rock Raiders fleet. 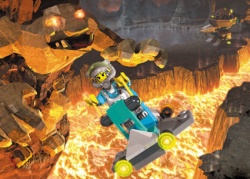 Jet piloting a Hover Scout past a Rock Monster

In the Windows version of LEGO Rock Raiders, the Hover Scout is classified as a small vehicle, and requires only one energy crystal for power. A Rock Raider must be trained as a driver to use a Hover Scout (the game's instruction manual incorrectly states that a Rock Raider must be trained as a pilot to use it; however, in-game it can only cross land, and only vehicles that either can cross lava or can cross both land and water require the pilot skill).

The Hover Scout is the fastest vehicle in the game, with a route speed of 3 blocks per second without upgrades, and 5 blocks per second with the engine upgrade. As such, a Hover Scout can be used to help a Rock Raider travel very quickly across caverns, particularly areas covered in rubble. Unfortunately, as it is incapable of drilling or carrying, this is the extent of its usefulness; the Small Digger costs the same amount of energy crystals to teleport, can drill through walls, and, while slower than the Hover Scout, is still faster than a Rock Raider on foot. 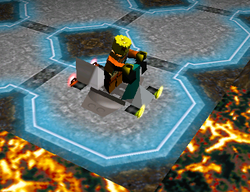 A Rock Raider on a Hover Scout

The Hover Scout costs one energy crystal and requires the following for teleportation:

Upon telelporting down a Hover Scout for the first time, the help window will display this message:

You now have your first Hover Scout. You can use it to glide quickly across land. 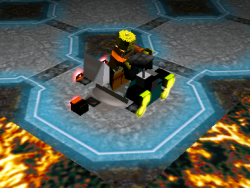 There are two upgrades available for the Hover Scout:

The PlayStation Hover Scout, with Docs nearby

The Hover Scout is used very infrequently in the PlayStation version of LEGO Rock Raiders, appearing in only one mission each in both the European and North American versions. Its intention in both of these cases is to navigate through narrow land paths filled with hazards, though its sensitive controls could potentially make this frustrating. The European version's instruction manual calls it an "easy-to-handle" vehicle that "first-time pilots might find a little tricky to control."

In Rock Raiders: High Adventure Deep Underground, Jet, Docs, Axle, and Bandit teleport down into the caverns of Planet U with Hover Scouts to explore. Axle lands to get a closer look around, only to get stuck in a pile of slimy slug secretion. Six slimy slugs approach and begin feeding on the Hover Scout's fuel, before Jet flies low to scare them away. The four Rock Raiders eventually find what looks like the remnants of an ancient rock monster civilisation. Later, Jet uses her Hover Scout to knock away ice monsters that are attacking Bandit's Rapid Rider, giving Axle time to save him. 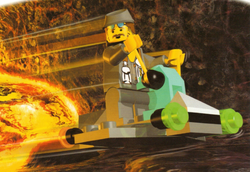 Docs racing away from an eruption

In Race for Survival, Docs takes a Hover Scout and heads off on his own to look for Quadrant 14, where Axle is trapped. While exploring in Quadrant 15, magma erupted into the cavern. Docs barely manages to outrun the magma and fly his Hover Scout through a high-up opening, before warning the others that the location is an active volcano.

In the comic Planet of the Rock Monsters! from LEGO Adventures! Issue 7, Jet and Docs head across a lava river with Hover Scouts after the Chrome Crusher's engine overheat. While exploring, the two are ambushed by rock monsters, who begin throwing boulders at them.

In River of Lava! from LEGO Adventures! Issue 10, Axle and Jet go exploring the tunnels on Hover Scouts, where they find a group of rock monsters running away from an underground volcanic eruption. Axle's Hover Scout is damaged by one of the rock monsters, and he has to hold on to Jet on her Hover Scout while they outrun the magma.