Official render of the Cargo Carrier

The Cargo Carrier is a large water-based vehicle used by the Rock Raiders to ferry equipment across underground lakes and rivers. It resembles a large catamaran propelled by two giant propeller blades. It is essentially a single giant cargo hold for carrying small vehicles over water. It does not appear in the PlayStation version of LEGO Rock Raiders and is not in any sets, making it the least used of all the major Rock Raiders vehicles.

In the Windows version of LEGO Rock Raiders, the Cargo Carrier is classified as a large vehicle, and requires four energy crystals for power. A Rock Raider must be trained as a sailor to use a Cargo Carrier.

The Cargo Carrier is one of only two vehicles that can be teleported at the Docks, the other being the Rapid Rider. It can only travel across water, and it moves at 1.5 blocks per second. Its main purpose is to transport the Small Digger and Small Transport Truck to land cut off from Rock Raider HQ by water, when they would be more helpful than a Rock Raider with a Tunnel Scout would be. In order for a vehicle to board, the Cargo Carrier must be moved so that its front ramp is facing a shoreline. Once in place, pressing Load Vehicle on its menu will call the nearest[verify] available vehicle to board. 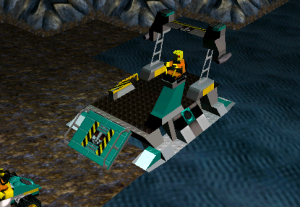 The Cargo Carrier preparing to board a Small Transport Truck

I'm just going to ignore upgrades on this vehicle for now, as I cannot see how it would possibly manage to get to the upgrade building...

Within its stats section, the comment (Drill???) can be found in the upgrade markers. Further examination of the Cargo Carrier's animations have revealed the presence of nulls (see LightWave Scene file) clearly labeled to be used to mount lasers to an extra model that would be added during the upgrade.

The Cargo Carrier costs four energy crystals and requires the following for teleportation:

Upon telelporting down a Cargo Carrier for the first time, the help window will display this message:

You now have a new Cargo Carrier. You can use it to transport small land vehicles across water.

The language table above is missing information for Finnish and Portuguese.