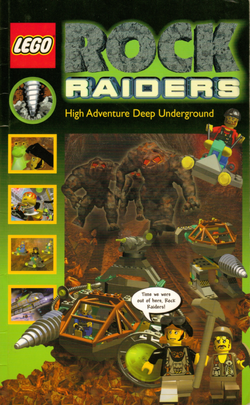 The novel tells, from Jet’s point-of-view and in greater detail, the events on Planet U. The book begins with the LMS Explorer heading on a return course to home base when the ship is bombarded by asteroids and sucked through a wormhole. Winding up in an unfamiliar system, the Rock Raiders are sent down to the nearest planet to mine Energy Crystals.

The characters of the Rock Raiders are expanded on, however. Tiny back-stories are given on some characters, such as how Chief lost his arm. Personalities are grown on, such as Sparks' coffee addiction, or Axle's jokes.

Unlike the Interactive Puzzle Storybook, Lava Monsters look like they do in the games. Granite Grinders are also shown as being able to jump.