This article is about the Rock Raider vehicle. For the LEGO set featuring it, see 4950 Loader-Dozer. 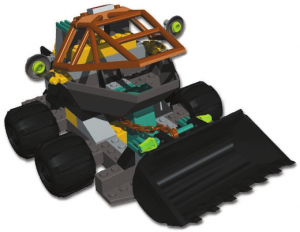 Official artwork of the Loader Dozer

The Loader Dozer (sometimes written Loader-Dozer) is a heavy-duty vehicle from the LEGO Rock Raiders theme. It is a four-wheeled bulldozer-like vehicle equipped with two powerful spotlights and a roll cage for protecting its driver. Its name comes from its gigantic loader, which it can use to quickly clear away debris, smash through loose walls, and carry large amounts of cargo. The Loader Dozer is featured in the LEGO set 4950 Loader-Dozer, along with Axle, a boulder for it to carry, and a rock monster. Loader-Dozers can be used in the video game LEGO Rock Raiders. 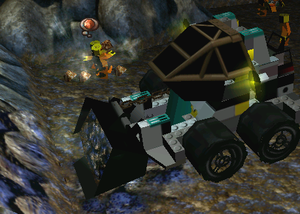 In the Windows version of LEGO Rock Raiders, the Loader Dozer is classified as a large vehicle, and requires four energy crystals for power. A Rock Raider must be trained as a driver to use a Loader Dozer.

The Loader Dozer can clear away rubble significantly faster than a Rock Raider with a shovel can. By default, it moves at a relatively slow speed of 0.5 blocks per second. Though the manual states that it can carry cargo with its loader, it actually needs to be upgraded in order to carry any cargo. With this upgrade, it begins collecting materials and carrying them back to the base, distracting it from clearing rubble; for this reason, it is probably better to ignore this upgrade and just use Small Transport Trucks for hauling exclusively.

The Loader Dozer costs four energy crystals and requires the following for teleportation:

Upon telelporting down a Loader Dozer for the first time, the help window will display this message:

You now have a Loader Dozer. This can be used to help clear rubble, as well as carrying Ore back to your Tool Store. 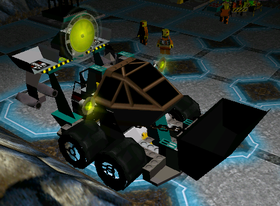 There are three upgrades available for the Loader Dozer, all of which add a large spoiler to the back of the vehicle: 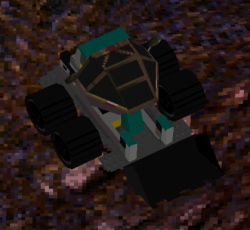 The PlayStation version of the Loader Dozer

Although the PlayStation version of LEGO Rock Raiders lacks rubble, the Loader Dozer is still available to use. Here, it has gained the ability to smash through walls of dirt and loose rock just by ramming into it, and can quickly clear away spider webs that would trap any other vehicles. It is also the only vehicle that is not damaged by geysers and lava plumes.

While the Loader Dozer can always be found in missions in the European version of the game, it often needs to be constructed and teleported for four pieces of ore in the North American version. It can also squish spiders and scorpions under its massive wheels in the North American version. Despite being such a powerful vehicle, it's usually not considered necessary for completion, since it can't smash through hard rock, and pusher beams can also be used to clear away webs. 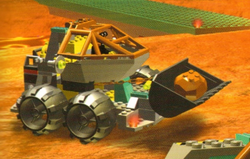 Page 31 of The Ultimate LEGO Book shows a photograph of a prototype Loader Dozer. Here, the chains controlling the loader are attached to a hinged spoiler behind the roll cage, rather than the lever that exists on the back of the vehicle in the final product. Axle also has a slightly different look, and the vehicle's roll cage and the rock monster are both unpainted (though the rock monster could be an ice monster).