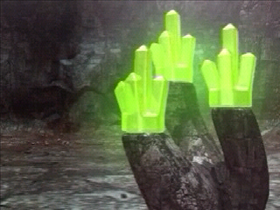 Energy Crystals are a precious natural mineral introduced in the Rock Raiders theme, where they are the main focus of the Rock Raiders' mission on Planet U. They also have gone by the more technical name Brickonium in American advertisements, as well as several variants of "Power" Crystal in various other media and countries. The collection of energy crystals to power the LMS Explorer and return home is the most important part of the franchise, and they appear in most of the sets and virtually all media related to the franchise in one form or another. 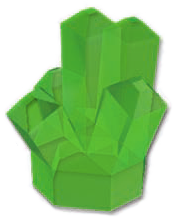 Official render of an Energy Crystal

Energy crystals are luminescent and bright green or yellowish-green in color. They are usually shaped like five four-sided crystals jutting upwards out of an octagonal base (part 30385, design 4540417), though since the 2007 Mars Mission theme there have been smaller energy crystals with a brilliant-esque gemstone shape (part 30153, design 4114505) as well. They seem to be very lightweight, and make resonating sounds when grabbed, thrown or dropped, but they are very hard to break. They also appear to have a distinctive smell, which many of the Rock Raiders creatures, as well as Docs, can sense. Their glowing radiation appears to be harmless to minifigures, but it attracts many of the creatures of Planet U. These creatures feed off of the power in these crystals, leading to the Rock Raiders often having to fight with them over the energy crystals. Monsters in particular are attracted to energy crystals, swallowing them whole and destroying anything that gets in their way of feeding on them.

Since the release of the Rock Raiders theme, energy crystals have been seen all over the LEGO universe. There are many caches on Earth (such as in the video games LEGOLAND), being the food for the rock monsters that also live there. Both smaller gem-like energy crystals and the normal five-pointed ones appear on Mars as well, in the Mars Mission theme and the video game LEGO Battles. 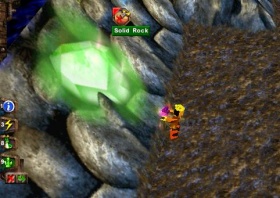 In the Windows version of LEGO Rock Raiders, energy crystals are a valuable building material that the majority of levels require collection of to complete. Many of the earliest levels require five, while starting after Frozen Frenzy all levels with a collection objective in each row require an additional five from the levels in the previous row, beginning with an objective of fifteen in Erode Works and Water Lot Of Fun and culminating with an objective of fifty in Rocky Horror.

Energy crystals can typically be found inside certain walls that can be drilled, and are far more rare than LEGO ore. Occasionally there may be energy crystals laying exposed on a cavern floor - Frozen Frenzy, Lava Laughter, Back To Basics, and Rocky Horror all have caches like that. Energy crystal seams will also contain four extra energy crystals, which will spawn in from of the wall as it is being drilled.

As the player progresses through the game, more obstacles get in the way of collecting crystals, especially enemy creatures. Rock monsters, ice monsters, and lava monsters will path to any exposed energy crystals on the map and devour them, causing those crystals to be lost forever if they exit the level before they can be destroyed. If no crystals are exposed, they will head towards Rock Raiders HQ and destroy buildings in hopes of getting to energy crystals inside them. Slimy slugs, meanwhile, will path to powered buildings and begin sucking the power out of them. These creatures can cause havoc to the player if the proper Precautions are not taken.

Energy crystals have a limited supply of energy, and can be drained entirely by mining lasers and slimy slugs. Power can be restored to them by placing the crystals near a recharge seam, though these only appear in four levels. In the game, they appear magenta in color and retain their luminescence, while in the cutscenes they become completely dark after being drained.

There is also a bug that causes all stored energy crystals to drain at the same time when a laser beam is fired. In some reported cases, other seemingly unconnected events will trigger the bug as well.

There is an unused high polygon energy crystal model "Crystal.lwo" hidden in Data\World\Shared, and duplicated in Data\Mini-Figures\Pilot. It has an unnecessarily high 688 polygons (the same quality could be achieved with 134 polygons), and has all four smaller crystals pointing away from the center one, while actual energy crystals have the second-tallest one parallel to the center one. Its total file size is 8,786 bytes. Presumably, it's the same energy crystal model used in the FMV sequences.

A second unused model can be found in Data\MiscAnims\ROCKSFALLING as "GEM.LWO". It has 88 polygons, greatly exaggerated proportions, and is somewhat off-center to the side and downward. It appears to be part of an unused landslide animation, and was likely never intended to be the main energy crystal model. Its total size is 1,374 bytes.

Very early in the development of the Windows version of LEGO Rock Raiders, the energy crystals were colored blue. Only one known screenshot of the crystals being colored like this in-game exists. However, most of the build screenshots until late in development featured blue energy crystal interface elements, such as these: 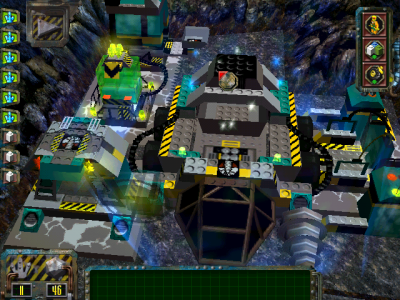 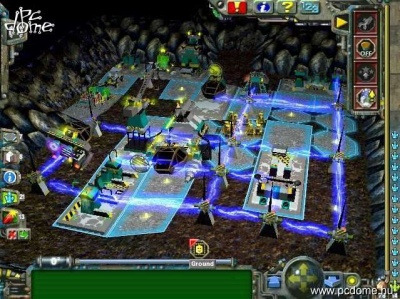 Furthermore, it appears that sometime between January and April the energy crystal color was changed from blue to some shade of green (or in-between): 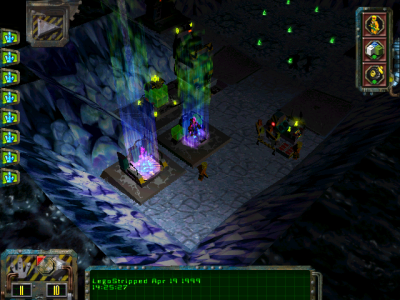 In the PlayStation version of LEGO Rock Raiders, energy crystals serve as a primary mission objective, and are usually required to complete most missions.

Red Energy Crystals are a rare, extremely powerful variation of energy crystals that only appear in the PlayStation version of LEGO Rock Raiders, functioning as bonus objects. They are five times more powerful than normal energy crystals, and are usually tucked away in harder to reach locations. Collecting red energy crystals isn't necessary to complete any levels with bronze medals, but required for most silver and gold medals.

In a commercial for the PlayStation game, Sparks finds a blue energy crystal under a pile of rubble [1].

In other Rock Raiders media

To do: Do we really need this section? They're prety much the most unanimous thing in all Rock Raiders media. Maybe mention the actual physical piece better?

In other LEGO products

To do: LEGOLAND, LEGO Island 2, Mars Mission, LEGO Battles, anything else