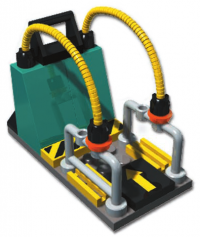 Official render of the Teleport Pad

The Teleport Pad is a basic Rock Raiders building used for teleporting Rock Raiders between the LMS Explorer and Planet U. It can also be used to teleport down most small vehicles. It is one of the few buildings that appears in a LEGO set, specifically in the set 4990 Rock Raiders HQ, where it serves as a parking space for a small hovercraft.

In LEGO Rock Raiders for Windows, the Teleport Pad is the second building available for construction. Although nearly all levels start the player off with a Tool Store, some also have a pre-built Teleport Pad. It takes up a 2x1 space, with one construction block in the center and one power path to the front. Despite being available immediately upon upgrading the Tool Store, it requires power to function; yet the Power Station can only be constructed after the Teleport Pad has been upgraded. Once it is powered, the Teleport Pad can be used to teleport down Rock Raiders. It can also train Rock Raiders as pilots. When the Support Station has been constructed, the Hover Scout, Small Digger, and Small Transport Truck can also be teleported. 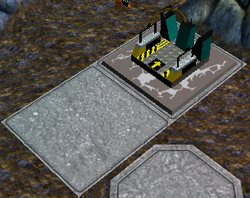 The Teleport Pad as portrayed in the Windows game

There are two upgrade levels available for the Teleport Pad:

The Teleport Pad costs 8 pieces of ore (or 2 building studs) and requires the following for construction:

In the PlayStation game

In the PlayStation version of LEGO Rock Raiders, the Teleport Pad can be found in most levels, where it is used to exit the level once the player has completed at least the minimum objective for completion. In most levels in the NTSC-U/C version of the game, the player's character is teleported down on the other end of the level, and needs to make their way through the level to the Teleport Pad while collecting what is needed. Many levels in the PAL version of the game instead start the player off next to the Teleport Pad, and they must explore the level to complete the mission objective before returning to be teleported out.

Some levels with a strict time limit for reaching a single target do not have a Teleport Pad, instead ending as soon as the player has completed the objective, such as collecting energy crystals or lost Rock Raiders in levels like Rapid Rush and Trapped!; or delivering a vehicle to a Teleport Station like in Express Delivery and Dozer Daze. Additionally, some two-player racing levels in both versions, such as There and Back Again and Formula 20,000, also end as soon as the targets have all been collected; though other two-player levels have a Teleport Pad that requires both players to enter it to end the level.