Spider Webs are nets of thin, sticky fibers spun by Spiders in the video game LEGO Rock Raiders. Webs serve as an obstacle to the Rock Raiders and are very difficult to destroy. 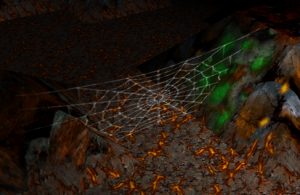 Webs in the Windows version of LEGO Rock Raiders, like spiders, are not used in the final game. The coding and files for them are still present, though they can only be placed in a map through the Object List file. Spider webs must be placed on tiles with parallel flanking walls bordering them, or else the web will break instantly. Anything that enters a tile containing a spider web will be slowed down until the object in question leaves that square or the web is broken. See the config documentation for details on this.

An additional way of creating a web is by using the debug key H , which will create a web at the mousepoint. Note that if the mousepoint is not on a tile with parallel flanking walls (see above), a web will not be created. 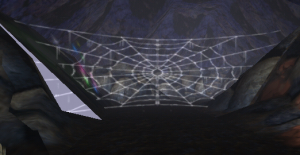 The unused spider web as seen from eye view.

Placing a spider web into a hidden cavern causes it to loop its expansion animation, and to behave as though it does not exist. Testing has revealed that this is a problem with how the object is treated by the game's exe. In addition to this, placing a spider web onto the same tile as another object in the Object List will cause the game to crash upon loading the map.

In the PlayStation version of LEGO Rock Raiders, spider webs act purely as obstacles and cannot be passed through like in the Windows version.

Only the Loader Dozer can destroy these webs. The pusher beam is also useful against the webs, as it can shrink them down until they pose no threat.

Webs in this version are placed as a ground type.