This article is about the Rock Raider vehicle. For the LEGO set featuring it, see 4920 Rapid Rider.

Official artwork of the Rapid Rider

The Rapid Rider, also called the Cat, is an aquatic vehicle from the LEGO Rock Raiders theme. It resembles a small catamaran propelled by two small jet engines, and is used for water-based reconnaissance. It has a small cargo hold for transporting material across underground lakes and rivers, two clamps to attach tools to, and two powerful spotlights for lighting up the caverns it sails through. The Rapid Rider is featured in the LEGO set 4920 Rapid Rider, along with Bandit and a boulder. Rapid Riders can be used in the tie-in video game LEGO Rock Raiders.

In the Windows version of LEGO Rock Raiders, the Rapid Rider is classified as a small vehicle, and requires two energy crystals for power. A Rock Raider must be trained as a sailor to use a Rapid Rider.

The Rapid Rider is one of only two vehicles that can teleport at the Docks, the other being the Cargo Carrier; it is also the only vehicle that does not require the Support Station to teleport. It can only travel across water, and it moves at a rather brisk 2 blocks per second. If a Rock Raider is ordered to board a Rapid Rider while carrying an energy crystal or piece of ore, it will be automatically placed in the vehicle's small cargo hold. When the Rock Raider gets out of the Rapid Rider, the carried object will be removed from its cargo hold.

A Rapid Rider moored at the Docks

The Rapid Rider costs two energy crystals and requires the following for teleportation:

Upon telelporting down a Rapid Rider for the first time, the help window will display this message:

You have just received your first water vehicle - the Rapid Rider. You can use it to get to places across water that you couldn't reach using land vehicles.

The Rapid Rider cannot actually be upgraded, as it is unable to cross land to reach an Upgrade Station. However, evidence of plans for upgrades can be found in the manual and code. The manual lists three upgrades available for the Rapid Rider:

As all three of these upgrades cost the same as the upgrades for the Small Transport Truck, they were likely copied from its description by accident. The PlayStation version of the Rapid Rider

The Rapid Rider is used in several missionsin the PlayStation version of LEGO Rock Raiders. It is the only aquatic vehicle in the game, and the only vehicle that can cross water besides the Tunnel Scout, the Tunnel Transport, and the Floating Platform. It can always be found resting at the shore of an underground lakes and rivers, and cannot ever be teleported down. Bandit can drive the Rapid Rider slightly faster than the other Rock Raiders, making him ideal for missions where it is the primary vehicle. However, it mostly finds its use in missions with a single large body of water; missions with multiple bodies that need to be crossed will usually use the Tunnel Scout instead. 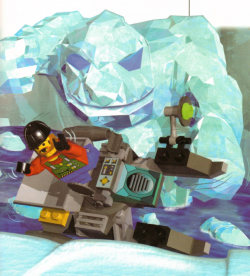 The Rapid Rider appears in all three Rock Raiders books, where it is always sailed by Bandit, who sails it into a frozen cavern containing ice monsters. In Rock Raiders: An Interactive Puzzle Storybook, Bandit has to sail through icy rapids (which serve as a maze puzzle for the reader) to escape an ice monster throwing icicles. In Race for Survival, an ice monster actually destroys the Rapid Rider, and Bandit must use its pieces to escape to the surface before a volcano erupts. In Rock Raiders: High Adventure Deep Underground, Bandit is attacked by multiple ice monsters, who eat the energy crystals out of the Rapid Rider and destroy it, before Jet and Axle arrive to rescue him.

The Rapid Rider also appears in the mini comic books for the sets 4920 Rapid Rider and 4990 Rock Raiders HQ, as well as the online interactive adaption of the former.