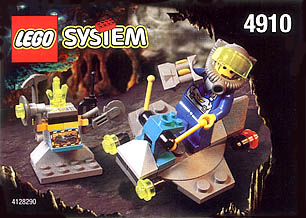 4910 Hover Scout is a Rock Raiders set released in 1999. It contains 39 pieces and has an MSRP $3. It features Jet and the Hover Scout, as well as a small Tool Store-like object with a computer, tools, and an energy crystal. The alternate designs include for a longer-looking hovercraft with a saw on the front, a small robot, and what might be a robotic tool shop.

The set was labeled for Ages 5-12 with an original list price of $3.50. It was marketed as part of Lego's "All Under $10" Deals. First edition sets includes a small comic.