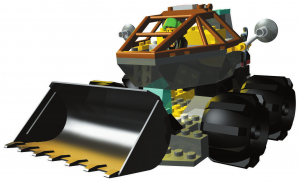 Vehicles are a major part of the Rock Raiders theme, appearing as the central focus of most of the building sets and serving many purposes in the video games. They are teleported down from the LMS Explorer into the caverns of Planet U to assist the Rock Raiders in exploring, mining, and transporting materials more quickly and efficiently than Rock Raiders on foot could. Many vehicles can also traverse terrain or mine through rock that would otherwise be an impossible task for a Rock Raider.

There are twelve major Rock Raiders vehicles, though only eight of those appeared in the building sets, and two of those were not the central focus of the set they appeared in. In LEGO Rock Raiders for Windows, vehicles are divided across two different menus, which are listed in that order below. Small vehicles are usually teleported down using the Teleport Pad and cost between one and three energy crystals to power, while large vehicles teleport down to the Super Teleport and cost between three and five energy crystals. The PlayStation version of LEGO Rock Raiders makes no such distinction, with all vehicles being teleported at the Teleport Station (a Super Teleport with a larger landing pad for the Tunnel Transport); additionally, vehicles in this version cost ore to construct, and the amount for each vehicle typically increases in later levels.

Small vehicles are usually inexpensive to teleport, making them useful both solo in early missions and in bulk in later ones. Though none of them are very powerful, their speed makes them much more efficient at reconnaissance, mining, and transportation than a Rock Raider.

The small vehicles include: 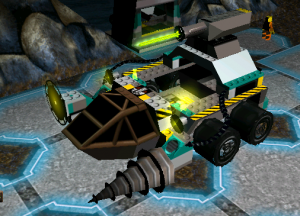 Large vehicles are much more heavy-duty and powerful than small vehicles, allowing them to be incredibly efficient at mining, transportation, and clearing debris. Their downside is that they cost more, and are much slower than their small counterparts; some being even slower than a Rock Raider on foot.

The large vehicles include:

Several other Rock Raiders vehicles do not appear at all in Windows version of the video game, and thus not fitting into the above categories. Below are vehicles that only appear in the PlayStation game or other Rock Raiders media. Vehicles from alternate build suggestions for the sets are not included in this list. 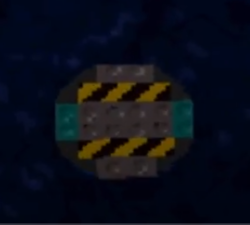 The Floating Platform is an automated navigation tool used to cross large expanses of water and lava. It consists only of a single cross-with-dome plate with caution stripes on the dome part (part 30303px1). It only appears in the NTSC-U/C PlayStation version of LEGO Rock Raiders, in the levels Docs' Mission and Web Space. It is used to carry the player across water and lava in places where aquatic or flying vehicles are not available. 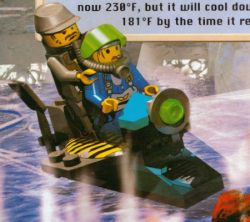 The Hoverboard is a small floating vehicle that can travel over land and water at low altitudes. It can hold two people at a time, though only one can sit. The Hoverboard is attached to the back of the Tunnel Transport in the set 4980 Tunnel Transport. Its only appearance in any media is in Rock Raiders - An Interactive Puzzle Storybook, where Jet and Docs use it to search for a level and elevated place to build Rock Raiders HQ, only to run into a battle between an Ice Monster and a Lava Monster. A Hoverboard also appears on the cover of Race for Survival, where it is driven by Jet and, depending on the version, carrying either Axle away from a magma flood or Docs away from a swarm of Rock Monsters; however, the vehicle does not actually appear anywhere in the book. 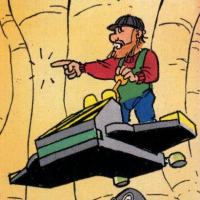 An unnamed hovercraft appears in the set 4990 Rock Raiders HQ, where it is intended to be parked in the building that would otherwise be the Teleport Pad. Its only major appearance is in the Time Cruisers comic featured in the September/October 1999 issue of the German LEGO World Club Magazin, where a humanized Bandit pilots it around the site where the Granite Grinder is drilling. It also appears in the mini comic book for the set 4990 Rock Raiders HQ, where Sparks uses it to fly around the eponymous HQ.