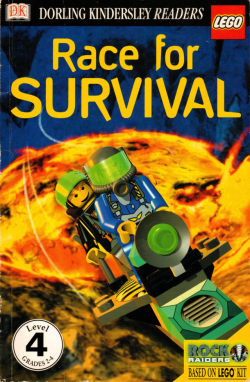 Race for Survival is a short illustrated novel released in 2000.

On the side of each page is a small article on Geology. It is, for the most part, canon, however there are two minor inconsistencies:

Interestingly, the cover shows Jet and Axle escaping a lava flow on a Hoverboard, though this scene never appears. The Hoverboard does not even appear in the book.