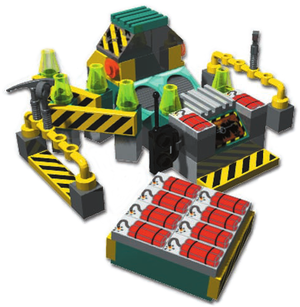 Official render of the Tool Store

In LEGO Rock Raiders for Windows, the Tool Store is the first building available for construction. As the Tool Store is used to dispense building materials, it requires none to be constructed, simply teleporting down as soon as its construction site has been designated. It takes up a 2x1 space, with one construction block in the center and one power path to the front. Nearly every level starts the player off with at least a Tool Store, and the few that don't have one in a hidden cavern that the player needs to uncover.

The Tool Store is used at the start of missions to initially teleport down Rock Raiders before a Teleport Pad has been constructed or powered. Because it is self-powered, it can be used for teleporting at any time, even after a Teleport Pad is functioning; and because it doesn't need materials to be built it can be used to start moving Rock Raiders HQ to areas cut off by water or lava. Rock Raiders can also be upgraded at the Tool Store, as well as trained to use dynamite once the Tool Store has been upgraded to level 2.

There are two upgrade levels available for the Tool Store:

The Tool Store costs no building materials and requires the following for teleportation: