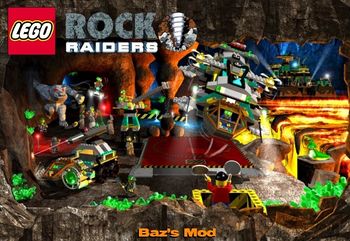 Baz's Mod is a large scale "overhaul" modification by Baz of LEGO Rock Raiders for Windows.

The primary objective of this modification is to add more content to each level of the game, like new caverns, etc. There are also eight altogether new levels that take the place of the tutorial missions. Several game mechanics have also been changed, improving weaker aspects of the game so that it may be played for its full potential, while still being more challenging than the original game.

The gameplay has been modified so that:

For a complete list of levels and their descriptions, see Baz's Mod levels.

The Game Interface has been changed to include:

The Rock Raiders have been changed to:

The buildings have been changed so that:

For a complete list of specifications for the vehicles, see Baz's Mod vehicles.

Many changes have been made and bugs have been fixed since the initial (beta) version of the mod for the final official release.