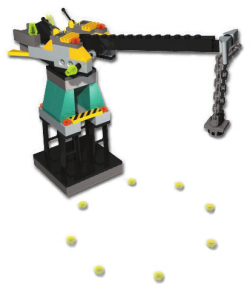 Official render of the Upgrade Station

The Teleport Pad is a building used by the Rock Raiders for upgrading vehicles. It is one of the few buildings that appears in a LEGO set, specifically in the set 4990 Rock Raiders HQ, where it serves as a crane to pick up and move about boulders containing Energy Crystals.

In the Windows version of LEGO Rock Raiders, the Upgrade Station is one of the four buildings unlocked upon upgrading the Power Station. It takes up a 2x1 space, with one construction block in the center and one Power Path to the front. Once it has been built and powered, vehicles can be upgraded by selecting a vehicle, pressing Upgrade Vehicle, and choosing to Upgrade Drill, Engine, Cargo Hold, or Scanner, if any of those options are available for that vehicle. It can also train Rock Raiders as engineers.

File:Upgrade Station PC.png
The Support Station as portrayed in the Windows game

There is one upgrade level available for the Upgrade Station:

The Upgrade Station costs 3 Energy Crystals and 20 pieces of Ore (or 4 Building Studs) and requires the following for construction: