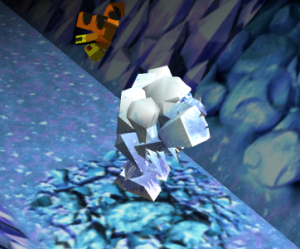 The Ice Monster is the monster that appears on the Icy Terrain. It is the second most threatening monster in the game after the lava monster.

The laser beam is the most useful weapon against an ice monster, as its 110 damage will kill one instantly. The pusher beam does only 2 damage, but will push it away 1.5 squares. As can be expected, the freezer beam is completely ineffective against ice monsters. They are scared by big bangs, such as those created by dynamite and the sonic blaster. Ice monsters do not consume as much as the other monsters, and will only eat 5 energy crystals at a time. Ice monsters are also the only type of monsters to never appear in the Cut Scenes.