Official render of the Mining Laser

The Mining Laser is a building used in the video game LEGO Rock Raiders for mining nearby cavern walls. It is one of the few buildings to make an appearance in a LEGO set, being present only in the set 4990 Rock Raiders HQ, where it uses its powerful laser to blast open boulders containing energy crystals. 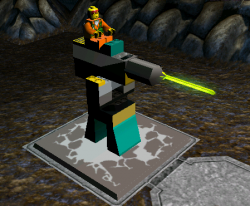 The Mining Laser as portrayed in the Windows game

In the Windows version of LEGO Rock Raiders, the Mining Laser is one of the two final buildings that can be constructed after upgrading the Support Station. It takes up a 1x1 space, with only a single construction block in the center. Once it has been built and powered, it can be used for mining by double-selecting it and aiming at the desired walls. It has a WallDestroyTime of 7 for dirt, 11 for loose rock, and 150 for hard rock. Every four laser blasts drains one energy crystal, which is exactly the same drain rate as that of the Large Mobile Laser Cutter. Its extremely slow mining time combined with how much power it uses, the general lack of recharge seams in the game, and its inability to move when the walls around it have all been mined makes it utterly useless for drilling. It has a firing range of 5 blocks, and does at least -40 HP or more to units per shot, thus making it useful as a weapon against monsters; although a Large Mobile Laser Cutter could easily be used instead. 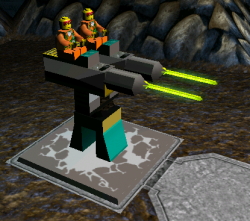 There is one upgrade level available for the Mining Laser:

The Mining Laser costs 1 energy crystal and 15 pieces of ore (or 3 building studs) and requires the following for construction:

In In LEGO Rock Raiders for PlayStation

In the PlayStation version of LEGO Rock Raiders, the Mining Laser does not have any function. It only appears in the level Supply Base[verify], where it can be found in front of a wall of hard rock sealing a cavern that contains a rock monster.

To do: Verify relationship between WallDestroyTime and actual shots needed, my tests show game speed seems to affect it for some unfathomable reason, but that might just be on my CPU/OS