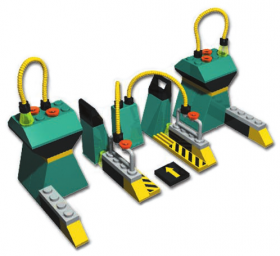 Official render of the Super Teleport

The Super Teleport, also called the Teleport Station, is an advanced building used by the Rock Raiders for teleporting heavy-duty vehicles between the LMS Explorer and Planet U. Like most Rock Raiders buildings, it did not appear in any LEGO sets; though the central part of the building is very similar to the Teleport Pad, which does appear in the set 4990 Rock Raiders HQ.

In LEGO Rock Raiders for Windows, the Super Teleport is one of the two final buildings that can be constructed after upgrading the Support Station. It takes up a 2x2 space, with two construction blocks in the center and to the side, and two power paths to the front. According to the manual, it has more than double the power of the Teleport Pad, though in-game it doesn't actually use any more power than any of the other buildings. Once constructed and powered, it can't actually teleport down any vehicles until the Support Station has been upgraded to Level 2; once this has been done, the Loader Dozer and Granite Grinder can be teleported. The manual indicated that the Small Mobile Laser Cutter may have been intended to be teleported with this building, though this may have just been a typo. 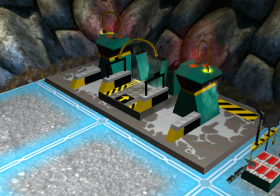 The Super Teleport as portrayed in the Windows game

There is one upgrade level available for the Super Teleport:

The Super Teleport costs 2 energy crystals and 20 pieces of ore (or 4 building studs) and requires the following for construction: 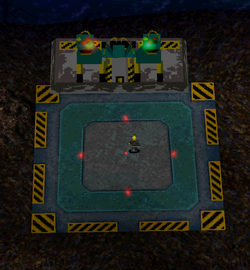 The Teleport Station as portrayed in the PlayStation game

In the PlayStation version of LEGO Rock Raiders, the Super Teleport is called the Teleport Station