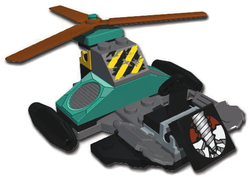 Official artwork of the Tunnel Scout

The Tunnel Scout is an aerial vehicle from the LEGO Rock Raiders theme. It is a small helicopter propelled by two jet engines. It is built for advanced reconnaissance, and can transport a single pilot over land, water, and lava at high speeds. The Tunnel Scout was not released in any LEGO sets, though the Kabaya promotional set 1276 Heli Transporter is similar to it. Tunnel Scouts can be used in the video game LEGO Rock Raiders, and do not appear in any other published media.

In the Windows version of LEGO Rock Raiders, the Tunnel Scout is classified as a small vehicle, and requires three energy crystals for power. A Rock Raider must be trained as a pilot to use a Tunnel Scout.

The Tunnel Scout is a fairly fast vehicle, capable of moving at 2.5 blocks per second. It is one of three vehicles that can cross water and the only vehicle in the game that is able to cross lava, making it especially useful in missions with erosion, and generally overshadowing both the Hover Scout and the Rapid Rider (ignoring the latter's ability to carry a single object). There are no upgrades available for this vehicle. 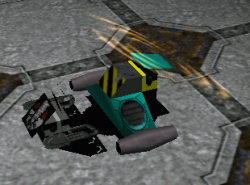 The Windows version of the Tunnel Scout

The Tunnel Scout costs three energy crystals and requires the following for teleportation:

Upon telelporting down a Tunnel Scout for the first time, the help window will display this message:

You now have a Tunnel Scout. Being the only vehicle able to cross land, water and lava, it should help you get to all of those places you can't usually reach. 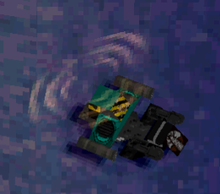 The PlayStation version of the Tunnel Scout

The Tunnel Scout appears very frequently in the PlayStation version of LEGO Rock Raiders, usually when the player needs to travel quickly over lava or multiple bodies of water. Occasionally, it needs to be built and teleported; in all of these cases, it costs four pieces of ore to do so. In some missions, such as Trouble Down the Mine, the player needs to use a Tunnel Transport to travel back and forth between other vehicles at different locations. In some two-player missions, such as Formula 20,000, both players have to race against each other using Tunnel Scouts.

The Tunnel Scout flies high off the ground, allowing it to pass over smaller enemies such as spiders. This also means that it passes over pickups, and the player has to land on top of or near them to collect them, potentially putting themselves in danger. It can still be damaged in the air by flying through active geysers or being attacked by monsters.