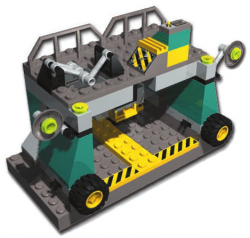 Official render of the Docks

The Docks is a building used by the Rock Raiders for teleporting aquatic vehicles between the LMS Explorer and Planet U. Because it functions as a mooring, it is the only building that must be built adjacent to water. Like most Rock Raider buildings, it did not appear in any LEGO sets. 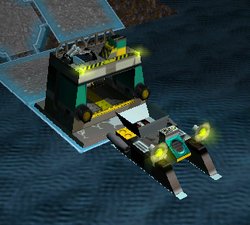 The Docks and Rapid Rider as portrayed in the Windows game

In the Windows version of LEGO Rock Raiders, the Docks is one of the two buildings unlocked upon upgrading the Teleport Pad. It takes up a 3x1 space, with one construction block in the center, one power path to the front, and one water tile to the back. Once it is powered, it can teleport the Rapid Rider, and eventually the Cargo Carrier. Though these vehicles can be boarded and disembarked at shores, they must be moored back at the Docks to be teleported out. Rock Raiders can also be trained as sailors at the Docks.

There are no upgrades available for the Docks.

The Docks costs 1 energy crystal and 8 pieces of ore (or 2 building studs) and requires the following for construction: