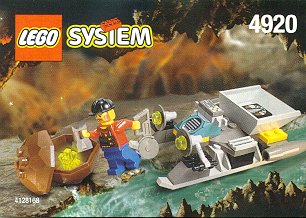 4920 Rapid Rider is a Rock Raiders set released in 1999. It contains 38 pieces and has an MSRP of $4. It features the Rapid Rider, along with Bandit and a boulder with an energy crystal. On the box are three alternate builds including a similar but more compact catamaran, a small hovercraft propelled by two wheels, and a flying jet-like vehicle.

The set was labeled for Ages 5-12 with an original list price of $4.50. It was marketed as part of Lego's "All Under $10" Deals. First edition sets included a small comic.

To do: find box art