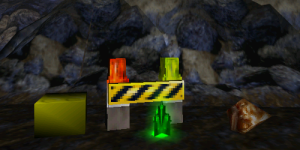 All four building materials in the Windows game

Building materials are used by the Rock Raiders for the construction, teleportation, powering, and upgrading of buildings and vehicles.

Natural minerals can be found by mining through the surrounding walls and caverns. Only two major types exist in the Rock Raiders theme. In the Windows version of LEGO Rock Raiders, minerals will be taken to Rock Raider HQ and either stored in the Tool Store or processed. A counter in the bottom right corner shows how many of each type the player currently has stored. In the PlayStation version of LEGO Rock Raiders, minerals will be picked up by the player, and either count towards the completion score or used to teleport necessary vehicles.

Energy crystals are the most valuable mineral found on Planet U, and are needed by the Rock Raiders to power the LMS Explorer. In the games, they are needed to complete certain objectives as well as for the powering of vehicles, and the construction and powering of buildings. Many creatures feed off of energy crystals, and will fight with Rock Raiders over them. They also come in a more powerful red variety in the PlayStation game.

LEGO ore is the most common mineral found on Planet U, and is essential for the construction and upgrading of buildings and vehicles. It is sometimes mentioned as being needed to repair physical damage to the LMS Explorer, though many times outside of the games it is simply a geode containing energy crystals.

Other building materials do not occur naturally in the caverns, and must either be processed from existing materials or found already existing in the Tool Store.

Building Studs are a processed form of LEGO ore, which can be made in the Ore Refinery. They can be used in all the same ways as ore, but much more efficiently.

File:Construction Barrier.png
Barriers and Ore being used to construct a building

Barriers are a material that only appear in the Windows version of LEGO Rock Raiders. They are used in the construction of all buildings except for the Tool Store, which they are stored in. When a building is designated for construction, Rock Raiders will automatically collect barriers from the Tool Store and place them around the perimeters of the building's foundation (shown as yellow highlights when placing a building). They start off being four studs wide when retrieved from the Tool Store, and extend to around twelve studs wide when placed.

Rock Raiders collect barriers in accordance with the internal Barrier Priority, which can be enabled in the cfg and configured in the priority panel. Barriers seem to take precedence over anything regardless of the ordering of priorities. Turning the priority off works, however. Barriers can only be carried by Rock Raiders, and can't be manually tasked by the player to be picked up. This can be problematic if a Rock Raider is scared by something while carrying one, and drops it to run away. Buildings will not construct without barriers, even if all other materials needed have been placed; in fact, in this situation its construction cannot be cancelled, and will remain unfinished until all remaining barriers have been placed.