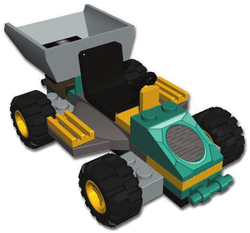 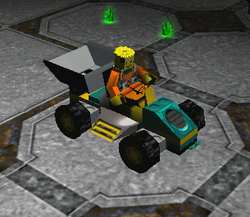 Without upgrades, this vehicle can travel at a decent 2 blocks per second, and can carry up to three energy crystals or pieces of ore. It can also carry a single electric fence. It cannot, however, carry building studs, barriers, or drained energy crystals. 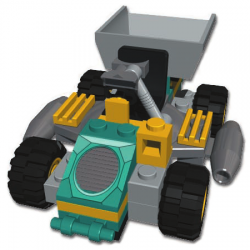 Although the Small Transport Truck is a very useful vehicle, it can be problematic when constructing buildings and power paths, as it often delivers more materials than are required. This prevents buildings from being completed until the extra materials are removed, which Rock Raiders may fail to recognise for some time, causing them to ignore any manual orders to pick up extra materials from the building site – power paths and erosion repairing can be completed regardless, but Rock Raiders may get distracted from doing so by the extra ore. This can be mostly remedied, however, by building an Ore Refinery, preventing Small Transport Trucks from taking ore anywhere but there (though this bug will still occur with energy crystals).

Upon telelporting down a Small Transport Truck for the first time, the help window will display this message:

You now have your first Small Transport Truck. You can use it to carry small items such as Ore and Energy Crystals.

There are three upgrades available for the Small Transport Truck: 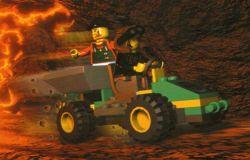 In Rock Raiders: High Adventure Deep Underground, Axle uses a Transport Truck to rescue Bandit from ice monsters that attacked Bandit's Rapid Rider, while Jet uses her Hover Scout to knock the monsters away. Axle and Bandit then encounter a slumbering rock whale, which wakes up and causes a magma flow. The two Rock Raiders (and a slimy slug) race away from the magma on the Transport Truck, and Bandit uses a blaster to cause a cave-in that blocks it. Axle and Bandit drive into a swarm of rock monsters that start to cause another cave-in, and Sparks has to quickly teleport them out.

The Small Transport Truck also appears in the mini comic book for the set 4990 Rock Raiders HQ, where Bandit uses it to dump the leftover rock from a refined energy crystal into the Rapid Rider's cargo hold, though part of it misses and hits Docs instead.