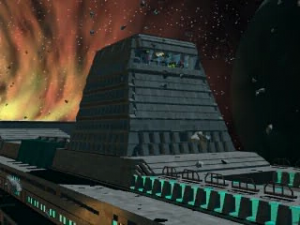 The bridge of the LMS Explorer, with bits of asteroid being deflected away from it

The LMS Explorer is a large mining spaceship that houses the crew and mining equipment of the Rock Raiders.

It set out to explore the outer rim of the galaxy. Three days before they were to return home, the ship sailed into a giant asteroid field, where it was badly damaged by the bombardment of rocks. Before the Rock Raiders could escape, the ship was caught in the gravitational field of a wormhole in the center of the asteroid field. With so much power already drained by the deflector shields, it wasn't long before the LMS Explorer was overpowered and fell into the wormhole. On the other end, it was flung into a distant galaxy, and ended up trapped in orbit around Planet U (though in some of the books, the wormhole was left out, and the LMS Explorer ended up at Planet U on the other side of the asteroid field). The ship's scanners used the little emergency power left to detect rich seams of Energy Crystals and LEGO Ore below the surface, and the Rock Raiders began teleporting down to mine it to refuel and repair the LMS Explorer.

Likely due to its massive size and the effort to scale it down to an affordable set, no parts of it were ever released, though most of the bridge was built at LEGO HQ in Billund, Denmark.[1] According to a fan-made recreation in MLCAD by Rock Raiders United user Arthuriel, the LMS Explorer is probably 975 studs (7.8 meters or 25 feet 7 inches) long, 134 studs (1.1 meters or 3 feet 6 inches) wide, and 109 bricks (1.0 meters or 3 feet 5 inches) tall,[verify] and has a part count of ~57,000 for the hull alone, whereby this number doesn't include an inner structure or interior rooms. 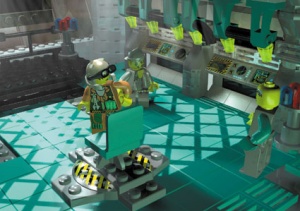 Chief, Docs, and Sparks on the bridge

The bridge of the LMS Explorer is the most frequently-seen room, as it's where the ship is controlled from and where Chief spends most of his time. It has a main monitor, that can retract from the ceiling, a small platform and several computer systems to control and supervise the ship. 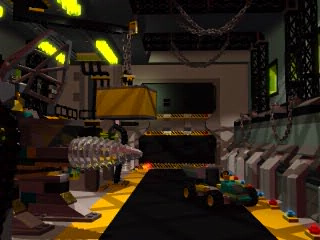 A Granite Grinder and Small Transport Truck in the hangar bay

The LMS Explorer contains several hangar bays, where vehicles and tools are stored until needed.