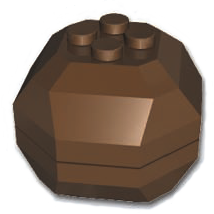 LEGO ore (often referred to as simply ore) is a very common material found on Planet U. It is a natural LEGO-based mineral used for construction and repair by the Rock Raiders. It's usually depicted as a brown boulder with 2x2 brick connections on the top and bottom (parts 30293 and 30294, color 25, usually with the studs rotated 45 degrees), though sometimes it appears much more like a realistic rock.

In the Windows version of LEGO Rock Raiders, ore can be found by clearing rubble from mined walls, though sometimes additional ore will lie on the surface of collapsed Rubble. Ore seams will also contain four extra pieces of ore, which will spawn in from of the wall as it is being drilled. Once a piece of ore has been uncovered, a Rock Raider will take it and store it at the Tool Store. Since Rubble is plentiful during mining operations, caverns are usually filled with plenty of ore, and the player rarely has to worry about running out.

Ore can be used for the construction and upgrading of buildings and power paths. It can also be used to upgrade vehicles. It can be taken to an Ore Refinery and processed into LEGO bricks called building studs, which are more efficient for constructing buildings.

Ore is generated in collapsed rubble by the PTL file, using the following line found in every level's PTL file:

Which causes a piece of ore to appear every time a Rock Raider shovels rubble, which needs to be done four times to clear it away completely, thus generating four pieces of ore.

Unused model and textures for Ore

There is an unused ore model left in the folder for ore, called simply "Ore.lwo". While "Ore1st.lwo", the model the game uses, is a fourteen polygon 3D model, Ore.lwo consists of three textures planes facing in different directions, similar to the model used for energy crystals. The textures it uses, "A000_OreTop.bmp" and "A000_OreSide.bmp", are both oddly contained in the folder for the Power Station (as is a duplicate of the texture used for Ore1st). The names imply that this model was switched to from the 3D ore for performance reasons, but later changed back, likely because the 3D ore contains only a little more than twice the polygon count.

In the PlayStation version of LEGO Rock Raiders, LEGO ore can usually be found exposed, often in small caverns that need to be mined into; occasionally, it can also be found inside walls. Ore in this game is only used for constructing vehicles to be teleported down at the Teleport Station. There will always be no more or less ore than what is required for the vehicles that can be teleported in each level. 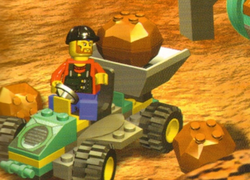 In the LEGO sets and most other Rock Raiders media (except for Rock Raiders: High Adventure Deep Underground), LEGO ore pieces are actually geodes containing Energy Crystals, sometimes referred to as Brickonium ore. This version of ore is processed into energy crystals at the Ore Processing Plant featured in the set 4990 Rock Raiders HQ. In the sets, these large boulders can be taken apart into two halves, with a stud in the center of the bottom half for a energy crystal to attach to. A non-LEGO version of this ore appears in Rock Raiders: An Interactive Puzzle Storybook, where rock monsters smash several open to get to the energy crystals inside; however, normal LEGO ore is implied to exist and, though never shown, needed to repair the damage to the LMS Explorer caused by asteroids.