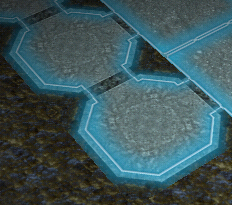 Power paths are constructed pathways that link buildings together in the Windows version of LEGO Rock Raiders. They have a variety of uses, such as transferring power to buildings, damming eroding lava, and helping Rock Raiders move around faster. Power paths are absent in the PlayStation version of the game.

Power paths are an artificial type of ground created by using two pieces of ore or one building stud. In order to build a power path, the player must select a square of ground and mark it for power path construction.

These paths have multiple advantages. First and foremost, they transfer power between buildings, so that any building linked via power paths to a charged Power Station will be operational. Rock Raiders can also run faster on it than on ground and on rubble. Another important use is for defense against erosion. Power paths, particularly charged ones{{ (which glow a light blue) are very effective at slowing down erosion, which is very useful on later levels with Molten Terrain. They do not hold off against the eroding lava indefinitely, and will eventually be reduced to a partially eroded square of ground.

Power paths can be destroyed manually by the player, as well as monsters, cave-ins, and landslides. They can temporarily slow down monsters (which contrary to Rock Raiders move slowest on paths and fastest on rubble). However, monsters can easily destroy paths by stomping on them. Power paths have also been known to cause Power Surges. This occurs when an extremely large number of paths are placed, which can render any linked buildings permanently unusable.

Power paths that appear on the map when the level begins are designated in the Path map file with the hexadecimal value of 02 00 02 00.