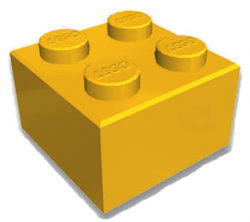 Official render of a building stud

Building Studs are an artificial building material found only in the Windows version of LEGO Rock Raiders. They are a processed form of LEGO ore produced by the Ore Refinery. They resemble standard yellow 2x2 LEGO bricks (part 3003, color 24) with four interlocking studs on top.

Building studs, like ore, are stored at the Tool Store, and are prioritized on the same level as ore in the Priorities list. As a building stud is worth five pieces of ore, it takes far less of these to make a building than ore, so constructing with them is always much quicker and more efficient. The major exception to this is Power Paths, which normally use two pieces of ore, causing a net loss of three pieces. Building studs can only be picked up by Rock Raiders, so using them instead of ore helps prevent Small Transport Trucks from delivering excess materials to construction sites. 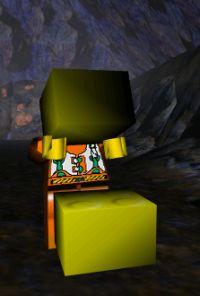 Two building studs, one being held by a Rock Raider

Upgrading the Ore Refinery can reduce the amount of ore needed to refine into a building stud down to only two pieces, essentially adding an extra three pieces of ore for every two the player finds. This greatly increases efficiency in constructing buildings, as the number of building studs does not change. However, when buildings are teleported out they leave behind the amount of ore required to build them, leading to a potential exploit where the player can get 250% the amount of ore out of a building that they originally put into it - though with the abundance of ore in the caverns, it's likely not worth the trouble.

Any excess ore deposited into the Ore Refinery (such as by Small Transport Trucks) will automatically be added to the ore counter, where it will be inaccessible until all stored building studs are used up. Once this point is reached, the excess ore will be ejected from the Tool Store; however, instead of taking it to the construction site, Rock Raiders will take it to the Ore Refinery and make building studs, then take those to the construction site. Stored ore can still be used for upgrading buildings and vehicles.

The language table above is missing information for Portuguese, Korean, mainland Chinese, and Taiwanese Chinese.