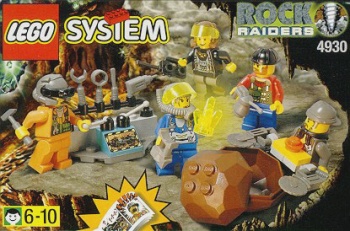 4930 Rock Raiders Crew is a Rock Raiders set released in 1999. It contains 38 pieces and was listed at $6. It features all the Rock Raider Characters except Chief, a small Tool Store-like building, several tool accessories including a large hand-held rock saw contraption, and a boulder with an energy crystal inside.

The set was labeled for Ages 6-10. First edition sets includes a small comic.