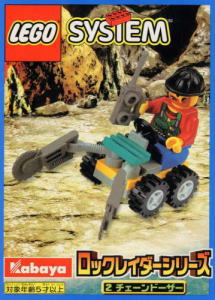 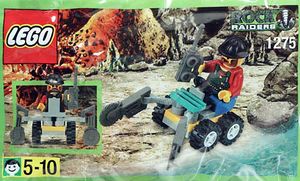 1275 2 Chain Dozer (２チェーンドーザー Ni chēn dōzā), also known as Rock Saw Vehicle and Rock Raiders Wheeled Vehicle, is a Rock Raiders set released released in 2000[verify] in a rare Kabaya promotional collection. It contains 22 pieces and has no MSRP or list price as it was sold for free with Kayaba Sweets Packages. It came packaged in a very small bag or box and features Bandit with the Chain Dozer, a very small vehicle seemingly meant to clear through debris, but with rock saws rather than a scoop or shovel. Its alternate model appears to be the same idea, but for drilling into the ground. This set did not include instructions, however it can easily be assembled from the picture.