Time Raiders features all-new vehicles, some of which serve completely new purposes. Additionally, every vehicle that can reach the Upgrade Tower has a unique upgrade, which can range from a rollcage to a mining laser or even an additional boost to another upgrade. For example, if a vehicle has an engine upgrade, its unique upgrade could give it yet another engine upgrade. Additionally, vehicle costs here are not final and may be tweaked for balance. There are also stylistic differences between many of the vehicles, which is due to the future raiders sending their more advanced – and thus, more powerful and restricted – equipment into the past. The distinction between present and future will be made below.

Please note that Command Ships cannot be upgraded like traditional vehicles. Their capabilities may differ depending on the mission. 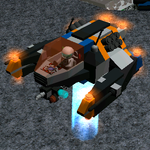 Present – A Command Ship is a versatile and volatile craft that is used specifically for infiltration. While it is quite small, it acts as both a command-and-control station and as a teleportation beacon. It has a small laser used mostly as a last resort.

In gameplay, a command ship can move around (sometimes) and thus be used like a vehicle. This is convenient for when there are materials far away and you don't want your raiders to run miles to retrieve them. Since it floats, it can go over water and lava and can't be attacked very easily. If the Command Ship is destroyed or is teleported out of the cavern, the mission is instantly failed, so try to protect it. It should be noted that the assumed position of a Command Ship is set when a raider, creature, or vehicle first sets a path to go to it. If the ship is moving, raiders will set down materials at the spot where the ship was when they picked up the material, and creatures can attack thin air and hit the ship. 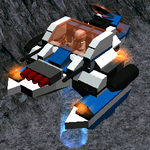 Present – While this is identical to Schneider's command ship in functionality, Jacred can sometimes have limited autonomy in-game. There are a few missions where the player can take direct control of him. If both command ships are present in a level, the closest one will be treated as "home base" and will spit out construction materials when needed.

Past – This Command Ship looks like it belongs in the U.F.O. theme, which is partly true as parts of it were salvaged from a wrecked Cyber Saucer nearly forty years ago. The front half of the ship is a large, powerful beam weapon which has probably lead to the long life of this ship, but since the hull has never once been upgraded, it's a wonder it has lasted this long at all.

Future – The raiders realized they needed a way to transport small amounts of resources across bodies of water without risking the Command Ships. Eventually, one cadet found an old island vacation brochure with some advertisements for recreational watercraft. The design was copied and soon built. After a successful test, the raiders sent their little piece of island fun back in time.

Present – These speedboats are used for basic water patrols. They aren't always equipped with weapons, but the existing mount allowed the raiders to fit one of the command ship's lasers there. This turned out to be quite convenient for drilling walls from the water where vehicles and soldiers can't reach.

Present – The first custom vehicle mod deserves a place here. It is found as an easter egg on some levels. It cannot be teleported, but if teleported out, it leaves a single sphere.

Present – This is a basic "gator"-style vehicle that is typically used to cart supplies around a base. It is useful anywhere you go. The bed is not covered, so violent bumps could cause it to drop its load. Upgrades: Speed

Future – Though the Time Raiders were carrying some mining tools to resupply the lost Rock Raiders, they did not have any purpose-built mining vehicles. After many months, the raiders were able to construct a small mining vehicle with parts from their combat vehicles, such as the Hematite Howitzer and the Unraveler. As a result, this vehicle is only available from the future.

Present – Clearing a path is important both on the battlefield and in deep caverns. This humble utility vehicle turned out to be extremely important, as the Time Raiders never packed shovels when responding to the LMS Explorer's distress call! It is the only thing that can clear rubble. Most missions will start with at least one.

Present – These quad-tracked self-propelled guns are the Time Raiders' main artillery pieces. Normally it launches plasma balls with a ballistic trajectory, but it has been retuned to fire a weak direct laser in order to work inside of the asteroids. You wouldn't want to blow up the whole place from the inside!

Present – These solid and silently running trucks are usually used for reconnaissance and as spotters for artillery units. They can be used as small personnel carriers in a pinch, but they are better suited to carrying supplies while in the caverns. The rugged design protects them from landslides.

Present – These hovercrafts are modified civilian rescue crafts that sacrifice cargo capacity for combat ability. Two laser turrets are fitted where propellers are usually mounted, so large turbojets were installed in the cargo bay. It has a scanning computer that can be used by a co-pilot.

Present – These mobile suits act as vanguards for the Time Raiders' infantry forces. Their multi-spectral lasers can be refitted to work in combat or utility roles. Luckily, this allows them to mine rock walls while keeping some combat potential. Unfortunately, the crystal count is quite high.

Present – This is the Time Raiders' flagship mech. It has many adapable mounting points for different weapons or tools. Luckily, it can fit the spare drills that were meant for the Rock Raiders' mining vehicles. It is one-of-a-kind, so The Wizard will only let you use it when necessary. It also has a hidden feature that is not immediately apparent...