← Back to Time Raiders 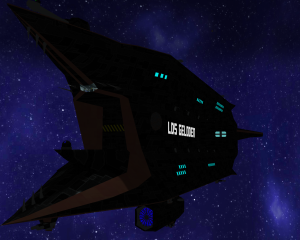 The LDS Geloden, currently at version 3. 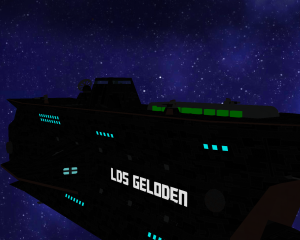 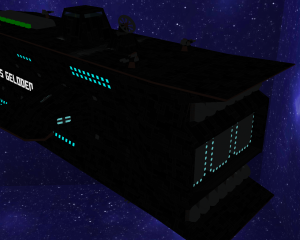 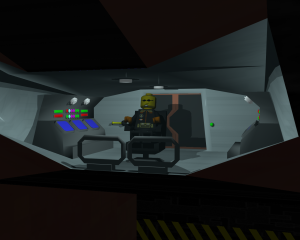 The Wizard chilling in the captain's chair.

This is the ship used by the Time Raiders throughout the game. It is an escort vessel and is a little more than half as long as the LMS Explorer, yet somewhat taller and wider. As its purpose is to escort other mining ships, it is armed with several defensive explosive-shell cannons to destroy space rocks as well as four beam lasers to attack any enemy vessels that might come along. Its largest weapon is the railcannon on the top that acts as a mass driver. Though slow to aim, it can punch straight through heavy armor.

The LDS Geloden also sports a wormhole generator for FTL travel, rather than a warp- or hyper-drive that the LMS Explorer seems to use. It charges using the generator on the underside that converts free photons into usable energy. The drawback is that creating a wormhole in an area of space already affected by another wormhole will cause catastrophic failure in wormhole generation.

Like most Lego capital ships, the Geloden has a teleporter array for sending and receiving people and materials from afar. Usually they are only used to send and receive to and from planets, but ship-to-ship teleportation is possible too and is much easier than attempting to set up a gangway between two ships.

The Geloden's FTL travel method is somewhat unorthodox as it does not actually travel close to the speed of light. It uses a wormhole generator which has its own set of advantages and disadvantages. Because wormholes are like tunnels through extra dimensions, there's no need to worry about hyperspace routes, and time dilation is hardly an issue. Specialized engines are also not necessary which can save space inside the ship. However, calculating the right energies to make a stable wormhole, let alone one that exits in our own universe, is very difficult and subject to extradimensional forces that we can't observe. Thus, wormhole generators are unpredictable and in fact a wormhole failure is what causes the events of Time Raiders to unfold. Instead of exiting into our universe, it exited outside of it and into the multiverse, or at least a place that can be described as such.

As the Geloden is a combat-ready ship it has two hangars, one specialized to launch fighters and such, and the other for mining and miscellaneous equipment. The top hangar stores combat crafts as the lower one has elevators that lead directly to the resource storage areas and teleporter room. There is a personnel elevator between the two hangars but otherwise they are separate.

There is a large shield array that covers the entire ship. It is adequate but the shields are not as strong as the Explorer's, so the armour takes a beating more often. Fortunately its armour was designed with practicality in mind, so it doesn't have the immense surface area that some starships have. A squadron of patcher bots keep the hull maintained inside and out using ores that are collected by the mining teams.

For a ship of its size, the Geloden is quite maneuverable. There are several small engines placed around the radar fins which can make the ship roll, yaw, or brake with ease. Pitch is iffy as it is entirely dependent on the center of mass of the ship, but a combination of rolls and yaws can be used too.