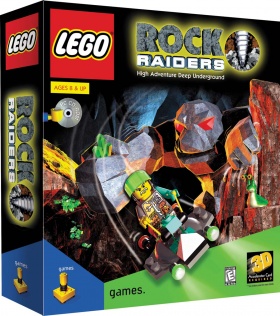 The original retail box for the English Windows version

The Windows version of LEGO Rock Raiders is a single-player real-time strategy game using grid-based maps, similar to Dungeon Keeper.[1] The player manages a team of Rock Raiders mining deep underground for energy crystals and LEGO ore to construct a base and expand mining operations. Ore can be obtained by clearing rubble from any mined walls, and is used in construction and to upgrade buildings and vehicles. Energy crystals are much more uncommon and precious, found only in specific walls, and are used to power buildings and vehicles. As the player gathers more resources, more powerful mining equipment can be teleported, allowing them to drill through tougher and more rock much faster. While mining, hidden caverns can often be discovered, some of which may contain missing units, secret energy crystal caches, or unanticipated threats. 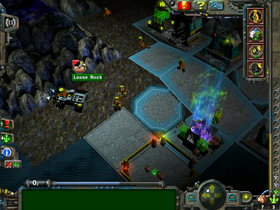 Mining near buildings constructed next to water

The primary method of control is the mouse cursor, which can can interact with the interface, move the camera around the map, individually click on units or surfaces, or click and drag to select many units at once. Once selected, units can, depending on their abilities, be directly ordered to perform tasks such as moving to specific locations, picking up materials, drilling walls, or clearing rubble. Many units will automatically carry out tasks on their own without player input. The priorities menu can be used to set what order Rock Raiders should carry out tasks, or disable certain types of tasks entirely.

The game begins with only the first mission unlocked; completing it will unlock the next two missions in the row below it on the level selection menu. Each mission begins with Chief, the leader of the Rock Raiders, presenting an objective for the player to complete. Most of the twenty-five missions require the player to collect a specific amount of energy crystals for completion, starting with a goal of five in the first set of missions and gradually increasing in later ones up to fifty in the final mission. Some missions instead require the player to rescue trapped Rock Raiders, retrieve missing vehicles, or construct a specific building. Many missions have a limited air supply, which requires a Support Station quickly being constructed to begin purifying the air in the caverns. There are also eight training missions to teach players how to control the game and how certain units work. These can be accessed from either the main level select menu or a separate training missions menu. 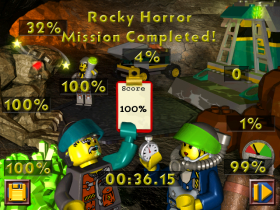 As the game progresses, an increasing number of hazards stand in the player's way. Natural hazards such as landslides, cave-ins, and eroding lava can devastate caverns and destroy any units caught in them. A variety of creatures inhabit the caverns, some of which can be dangerous to Rock Raiders. Rock, ice, and lava monsters eat energy crystals and attempt to destroy buildings to get to the energy crystals inside, while slimy slugs will try to suck power from buildings. Defensive measures like weapons, reinforcement, power paths, or electric fences can be used to defend buildings from creatures.

Once the player has completed all objectives, the mission will end, usually by showing all remaining units teleporting back up to the LMS Explorer. Chief will then score the player percentage-wise based off of quota like the amount of energy crystals and ore collected, the number of walls drilled and hidden caverns discovered, or the amount of oxygen supply remaining. A 100% score is not needed to complete a mission, and is indeed impossible for some missions in the default game. After completing the final level, the outro cutscene plays and the credits roll. The player does not need to complete all twenty-five missions to beat the game, though they can go back afterward and complete skipped missions or replay completed ones. If a 100% score on all twenty-five missions is somehow achieved, the game ends with a special "better" outro cutscene. 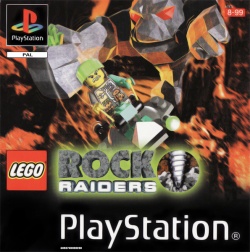 The PlayStation version of LEGO Rock Raiders is an action and strategy game, and can be played either single-player or multiplayer. The player controls a single Rock Raider exploring underground caverns to collect energy crystals and LEGO ore and rescue stranded Rock Raiders.

Because the North American release was reworked and released months after the European release, a number of differences exist between the two versions:

PlayStation. In March 1999, six months before the PlayStation version of LEGO Rock Raiders was due to be submitted to Sony[2]

LEGO Rock Raiders was initially announced in February 1999, along with LEGOLAND, LEGO Friends, and LEGO Racers. At the time, it was scheduled to be released in September for both Windows and PlayStation, and was to have a retail price of US$40–$45.[3] The September release date was still publicized as late as August of that year.[4] In May 1999, all four games were demonstrated at E3 1999 in Los Angeles, California, at LEGO Media booth #1524.[5]

The Microsoft Windows version was released on 15 November 1999 in North America,[6] 30 November 1999 in Europe,[citation needed] in English, German, French, Dutch, Spanish, Italian, Danish, Norwegian, Swedish, and Portuguese. In Italy, the game was distributed by Leader and priced at 100 lire/ITL.[7][8]

The Russian version was translated by Logrus (Логрус) and released in Russia by Noviy Disk (Новый Диск) on 25 September 2000, with a retail price of 27 Y.E. (USD).[9][10] From 28 October to 12 November 2000, demonstrations were held for LEGO Rock Raiders, along with LEGO Chess, LEGO Loco, LEGO Friends, and LEGO Racers, in the foyer of Moscow theater Kodak Cinema World (Кодак Киномир Kodak Kinomir).[11]

The Japanese version was translated and released by Eidos Interactive (アイドス) in Japan on 8 December 2000 with an open price; it initially sold for around ¥6000.[12][13]

The Hebrew translation was released in Israel by Hed Arzi (הד ארצי‎‎) in 2000.[citation needed] The engine was modified for this release to display text right-to-left. This version's title was translated into Hebrew, and changed to LEGO Space Mission (לגו משימה בחלל Lego Template:Tt Template:Tt).

In South Korea, the game was published by SsangYong (쌍용)[17] and distributes by Joypark with a retail price of 32000 KRW. All text was translated to Korean, but the dialogue used the original English audio instead of new Korean recordings.

In Taiwan, the game was released by King's International Multimedia (協和國際多媒體股份有限公司) on 15 July 2000. In mainland China, the game was published by Ogilvy & Mather Electronics/Aomeisoft (奥美电子).[citation needed]

The PlayStation version was released on 17 August 2000 in North America.[18]

The game was released in Russia by Noviy Disk on the same day as the Windows version was; however, it was not translated into Russian, instead being just the standard ten-language European version.